The number of luxury homes sold in Austin in the first five months of 2022 was almost twice the number sold there for all of 2018. Compare that with Houston, Dallas-Fort Worth, and San Antonio, where the number sold during the same period was about on par with the total sold in those cities four years ago.
Housing data show Austin’s luxury market has been gaining momentum over the past few years.
In 2018, the city’s luxury sales were half of those in Houston and DFW. By 2021, though, Austin was only slightly behind Houston. The two cities have been neck and neck this year in terms of luxury home sales, and Joshua Roberson, lead data analyst with the Texas Real Estate Research Center at Texas A&M University, says Austin is poised to surpass Houston.
“What makes this all the more remarkable is that Austin’s population is only about one-sixth the population of Houston and one-seventh that of DFW,” Roberson said.
DFW has led the state in luxury home sales for five years in a row.
“In-state migration, particularly among higher-income households, has propelled luxury home markets,” Roberson said. “And booming DFW and Austin have provided steady growth for the state’s overall luxury market.”
However, while year-to-date sales are on pace to surpass pre-pandemic sales, Roberson says it’s too early to tell if there is enough momentum to exceed 2021 sales. 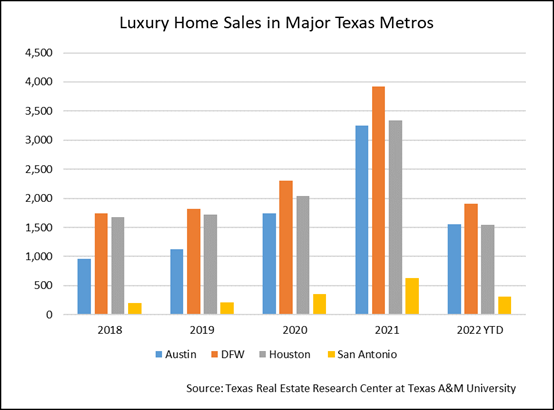