​​​​​​AUSTIN – Texas Realtors has released its 2020 Texas Homebuyers and Sellers Report, which examines details about real estate consumers’ income, ethnicity, age,​ and perceptions of the homebuying and selling processes. 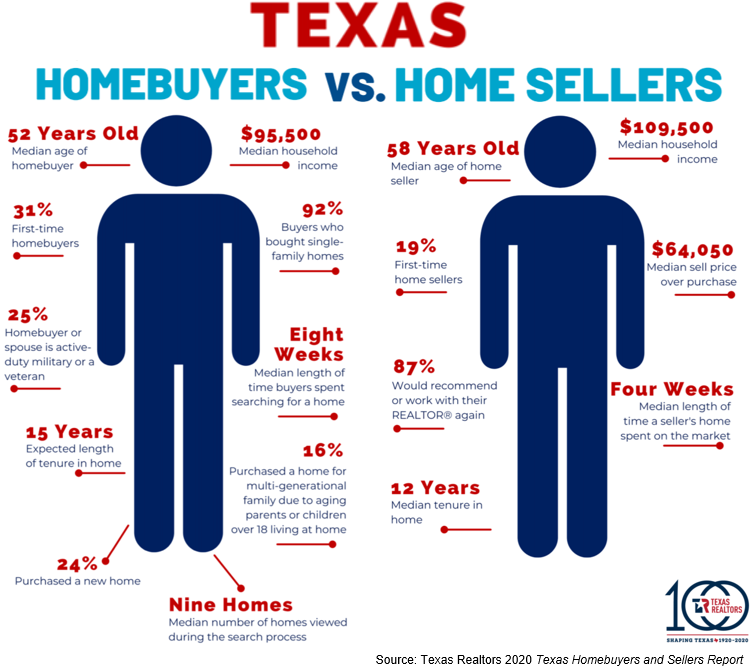 For those who bought newly built homes (24 percent), the top reason for doing so was to avoid renovations or plumbing and electrical problems.

The median age of Texas homebuyers was 52, five years older than last year. Nearly one-third of all buyers were first-time buyers. The typical homebuyer spent eight weeks searching for a home, viewing nine houses in the process.

Texas buyers had a median household income of $95,500. The majority of them (92 percent) purchased single-family homes.

The majority of Texas homebuyers (67 percent) were married couples, followed by single females at 17 percent, single males at 10 percent, and unmarried couples at 5 percent.

White buyers made up the largest share of Texas homebuyers. About 14 percent of homebuyers identified as Hispanic, with 5 percent black.

The most popular reason for putting a home on the market was to move closer to friends or family, followed by job relocations and proximity to work.

Sellers spent a median of 12 years in their homes. The median sales price was $64,050 higher than what they paid for their homes. Homes stayed on the market for a median of four weeks.​​​​​

Data from the 2020 report are derived from the 2019 Texas Profile of Homebuyers and Sellers by the National Association of Realtors.