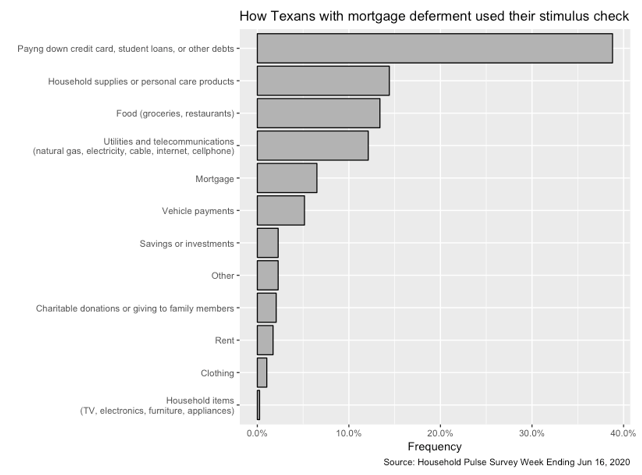 The Household Pulse Survey covers a wide variety of questions including health, food availability, economics, and education. The most recent survey includes new questions about the first round of stimulus checks, formally known as Economic Impact Payments (EIP). It has some revealing findings specific to Texans.

“There doesn’t look like there was much difference between how homeowners and renters spent the EIP,” s​aid Real Estate Center Senior Data Analyst Joshua Roberson.

The number one usage of funds for renters was their rent. For homeowners with mortgages, mortgage payment was second only behind food (groceries/restaurants).

“In general, homeowners do appear slightly more likely to use their EIP to either pay down consumer debts or save it,” said Roberson.

Another takeaway was from the respondents who claimed to have mortgage deferments. Less than 3 percent of homeowners claimed to have had a deferment plan. This is lower than the national rate reported by Black Knight Inc., which reported closer to 9 percent of all active mortgages as of June 30th. This lower rate is likely due to the difference in COVID-19 business restrictions between states like Texas and others such as Michigan or some in the Northeast. An additional roughly 3 percent owned their homes free and clear.

For those with deferment plans, the number one use of their EIP was to pay down consumer debt such as credit cards and student loans. Food was a distant third while mortgages were even further back at fifth.

Homeowners with mortgage deferments also overwhelmingly indicated that, at least for the most recent survey week ending June 16th, they were able to pay for their everyday needs with their regular source of income. Other sources, such as unemployment benefits, the EIP, or savings, barely registered in comparison.

Many in the real estate industry have kept their eyes on mortgage deferment (or forbearance) households as a leading indicator of things to come.

​”In Texas, it seems that those who did arrange deferments may have used it as a defensive measure to prepare long-term for the tough economic times ahead,” said Roberson. “Many of these households appear to have taken the money otherwise used on their mortgages to pay down debt and hopefully open up more cash flow​ in the future.”

At the other end of the spectrum are renters, who in general are a younger demographic and tend to earn less than homeowners. Nearly a third of renter households in the survey reported earning less than $25k on their 2019 tax returns. Texas households in that income bracket have had a much higher proportion—nearly 60 percent—of some level of income loss whether through termination, furlough, or hours cut.

Most renters in the most recent survey were still able to pay for their everyday needs through their regular income, but the frequency isn’t as high as homeowners.

Renters were twice as likely to either use unemployment benefits or borrow money from family members to pay for expenses. The end result is less confidence with renters to pay their next month’s rent payment.​